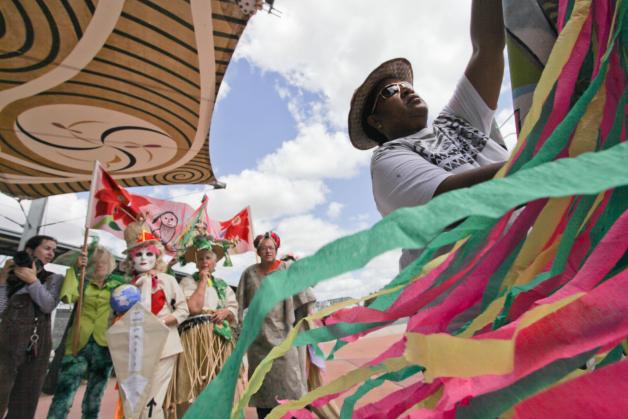 Rousing drums, hand-painted banners, outrageous costumes, colourful props and occasional giveaways signal yet another public procession proclaiming civic pride - but why are the postcards addressed to real-estate agents? Why is a woman dressed as a prisoner marching next to a garden fairy? With a multitude of signifiers on display, where are the insignia and logos? What is the meaning of the muted banners that depict faraway landscapes?

Finding Your Way Home, by Sharka Bosakova and Stephanie Stainlay, is an event that has emerged from thirty-six community workshops where participants were prompted with a simple question: what reminds you of home? The topics of ensuing discussions ranged from childhood memories, nostalgic triggers and wartime recollections, to degraded environmental habitats and the now-distant Australian dream of home ownership.

The workshops were held in the North Logan suburbs of Woodridge and Kingston that are troubled by their past: a disproportionate population from disadvantaged* and refugee backgrounds implies a persistent contention with the repercussions of poverty, mental illness, violence, exile, war and social dislocation. However, when the artists began working with the community groups and social services in the region, they found that the dire statistical profile was a poor account for the vitality of the residents and workers who remained dedicated, enthusiastic and compassionate, despite often bearing the brunt of their unsettling social environment.

The resulting event is exuberant but its unconforming elements hint at something less transient: the ingenuity, resourcefulness, optimism, youthful energy and defiance that do not only sustain at times of difficulty but ultimately, also provide paths out of adversity. These are, perhaps, the mechanics of an intrinsic resilience.

* Woodridge and Kingston are ranked by the SEIFA socio-economic index in the bottom 5% of Australian suburbs. (Source: Australian Bureau of Statistics, 2011 Census)

The public procession for Sharka Bosakova and Stephanie Stainlay's project, Finding Your Way Home, will run through the Woodridge Station Market.

Sharka Bosakova will be running a series of weekly workshops with the members of the Kingston East Neighbourhood Group.

The workshops will form the basis for a public/street event planned for late-2014.

Does your home have any problems? Here is a list created by the class – all from personal experiences.

Moving in is a project about home ownership. The participants I am working with are my students at Career Employment Australia located in Logan Central. CEA offers free study to people who are recieving Centrelink benefits and are looking to improve their language, literacy and numeracy skills to help them find work.

When I suggested to my class that we get involved in the The Homesickness Project they were all keen to try something new. So every Tuesday morning we now discuss the experiences they have had renting, dealing with landlords and real estate agents.